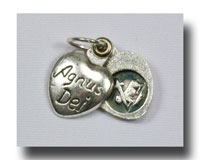 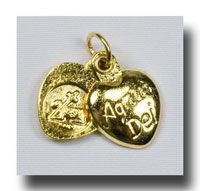 The Agnus Dei is blessed only by the Pope. The ceremony takes place during Easter time in the first year in the reign of the Sovereign Pontiff and then once every seven years thereafter (as needed). This blessing is performed on Thursday of Easter week. The ceremony of blessing is as follows: the Pope first blesses the water, then pours balsam and oil into it in the form of a cross. he then recites special prayers and a blessing over a great number of ornately decorated lambs made of wax. The lambs are then carried on silver bowers with great solemnity by his attendants who then immerse them in the blessed water. The prelates who are in attendance lift them out of the water and dry them. They are put in a special place until the next Saturday.

On the Saturday of Easter week during the Mass of the Holy Father, a sub-deacon carries the Agnus Deis to the altar on a large silver tray, before the Pope's communion singing:

"Holy Father theses are the young lambs which have announced to you - Alleluia!"

"Behold they have just come from the fountains; They are filled with light - Alleluia!"

These words which imply the representation of the newly baptized. The Pope then distributes the Agnus Deis with appropriate ceremony, during the singing of the Agnus Dei of the Mass - first to the Cardinals who on receiving kiss his hand; next the Bishops who kiss his right knee; and finally to the Prothonotaries who prostrate themselves and kiss the cross on his sandals.

From the hands of these persons the Agnus Deis find their way by subdivision and distribution to all parts of the world. Pious persons (usually Nuns) divide them into very small portions. They are encased in an appropriate cover - generally a heart - for the use of the faithful.

Blessed items cannot be sold! A donation for the Agnus Dei is to cover the costs of making these available to the faithful!

Spiritual Benefits: Most commonly the Agnus Dei is attached to the scapular but it is not necessary to wear it this way in order to gain the benefits attached to wearing it. Divine protection is imparted to the faithful who use the Agnus Dei with lively faith, ardent charity and firm confidence in God. In the Agnus Dei, as an object blessed by the Church, two things are to be considered. First the power conferred on it as a sacramental which is an instrument of God's grace. Secondly, the power it possesses of awakening in the persons who use it with faith and confidence, an efficacious calling down of the blessings of heaven.

Wax and the lamb have been chosen emblems of the angelic virtues.

The Agnus Dei serves to call our minds to the promises of baptism. It represents the whiteness of our souls after being washed in the waters of regeneration. The Agnus Dei is not a reward of virtue but a means of acquiring it!

It is one of the most ancient and most powerful Sacramentals of the Church and it's devoted usage fosters piety and protects us from both temporal and spiritual evils. Wear it devoutly and God Himself will show what great benefits it bestows.

Is the Agnus Dei blessed? Yes, by the Pope!

The Supreme Pontiff implores God to bless, sanctify and consecrate them in such a way that the faithful who, with a sincere and lively faith, piously use them, may obtain the following graces:

1) That the sight or touch of the lamb impressed on these figures excite the hearts of the faithful to contemplate the mysteries of redemption, may induce them to thank, bless and adore the Divine Goodness and thus obtain pardon of their faults.

2) The sign of the cross represented by these figures may remove evil spirits, hail, thunderstorms and tempests.

3) That through efficacy of the Divine Blessing they may escape the wiles and temptation of the dragon.

4) That women bearing children may be preserved from all harm and favoured with a happy delivery.

5) That they foster piety and banish tepidity, preserve from vice and open to virtue.

6) That they banish evil spirits, deliver from temptation and preserve from eternal pain.

7) That they are a protection from sudden and unprovided death. (So that you will received Extreme Unction prior to death and therefore escape Hell)

8) That they dispel fears occasioned by evil spirits.

9) That they are a protection in combat and have the power to ensure victory.

10) That they delivery from poison and the snares of the wicked.

11) They protect against sickness, pestilence and epilepsy.

12) That they hinder the ravages of pestilence, epidemics and infectious diseases.

13) That water or fire have no power over them.

14) That they quiet winds, dissipate hurricanes, calm whirlwinds and keep away tempests.

15) That they save from shipwreck and danger of lightning and floods.

16) That in prosperity and adversity pious Christians may be fortified with Divine protection.

17) That through the mysteries of the life, passion, death and resurrection of Our Lord they may be preserved from a sudden and unprovided death, from every danger and from every evil.

History of the Agnus Dei

Some historians place the origin of the Agnus Dei as early as the time of the Emperor Constantine, near the beginning of the 4th century. The discovery of the Agnus Dei in the tomb of the pious Empress Maria Augusta is the strongest evidence of the antiquity of it's introduction among Christians.

The Catholic dictionary placed the beginning of the custom as early as the time of Pope Zosimus, who ascended the throne of Peter in the year 417. When the Pascal candle was finally extinguished on Ascension Day the people were accustomed to procure small portions of what was left of it and carry them home as a protection against tempests. All authors agree that it was from this custom of the people that the Agnus Dei had it's origin. There is a great dispute among present day historians as to when the custom as it has been handed down to us began, but it is of sufficient antiquity to have eluded ready dating.

In recent history it has become a tradition to attach the Agnus Dei to scapulars, rosaries and over the entry ways of your home as well as having it on your person.

Your cart is empty.